So for all these questions let us discuss below.

Ever since time immemorial, 3d printers are focused on creating scale models using computer-aided design (CAD). The first patent for a 3d printer was given to Charles Hull for “Apparatus for Production of Three-dimensional Objects by Stereolithography” in 1986 as Hull wanted to start the first 3d printing company, 3d Systems Corporation.

With the background in industrial manufacturing, most 3d printing service technologies were protected by patents held by companies in the industrial market. As patents expired, 3d printers attracted customers to learn more about it.

It was not until the expiration of Stratasys’ patent in 2009 protecting their ownership of the fused deposition modeling (FDM) process that affordable consumer thermoplastic extrusion printers proliferated. The expiration of subsequent patents covering alternative additive manufacturing processes has further fuelled this growth.”

How do 3d printers work?

3d printers build objects using a process known as additive manufacturing. The material is put down in layers; each layer adds to the previous layer and in turn becomes a base for the next layer. Most 3D printers in the consumer market use thermoplastic inks in the printing process. These polymers become soft within a temperature range and then re-solidify when allowed to cool. 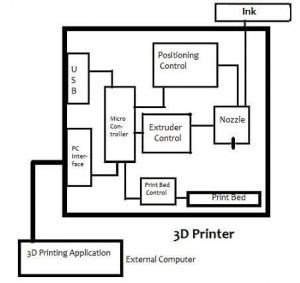 Functional diagram of a 3d printer

Referring to the diagram above, the print bed is where the object is printed. It is usually covered with an adhesive material, and with some inks, it also needs to be heated in order to minimize distortion in the printed object. The extruder temperature may be set manually, depending on the model; the nozzle position is controlled by the microcontroller, which is directed by commands in the print file.

The *.STL format was created by Chuck Hull’s original printer. It supports a layering process for one extruder. As printers developed, other formats, both open-source and proprietary, were developed. In 2015, the 3D Manufacturing Format (*.3MF) was announced. Developed and supported by the 3MF Consortium, the aim is to standardize 3D print files.

What Resolution Can 3d Printers print?

3d printing at home gives us the ability to manufacture bespoke objects for a very little cost. But the time it takes for a digital 3d model to be processed into a physical object is not as quick as you might think. The size and print quality of the object will have a dramatic impact on the printing speed and can take many hours to produce a finished result. In fact, All 3DP’s tests show that the printer’s speed has much less impact on the duration of the printing process than the size and the quality settings.

Currently, there are generally three sets of printing speed that 3D printers can support. The first set is has been grouped at around 40 to 50mm/s, while the second set prints at about 80-100mm/s. Meanwhile, the fastest set prints at around 150mm/s. Some printers may even print at a speed faster than 150mm/s.s. Typically, faster 3D printing speed means lower quality, though.Above150mm/s, the quality drops noticeably, and you may experience problems as the filament tends to slip at these speeds.

How to set the 3d printer speed?

The 3d printer speed is usually set in the slicing software that you use to prepare your 3d model for printing. In Cura, version 15.04, for example, you simply enter the printing speed in the print speed field on the Basic tab(in former versions, you first have to switch to Advanced mode and open the Speed tab before you have access to the Print Speed setting). 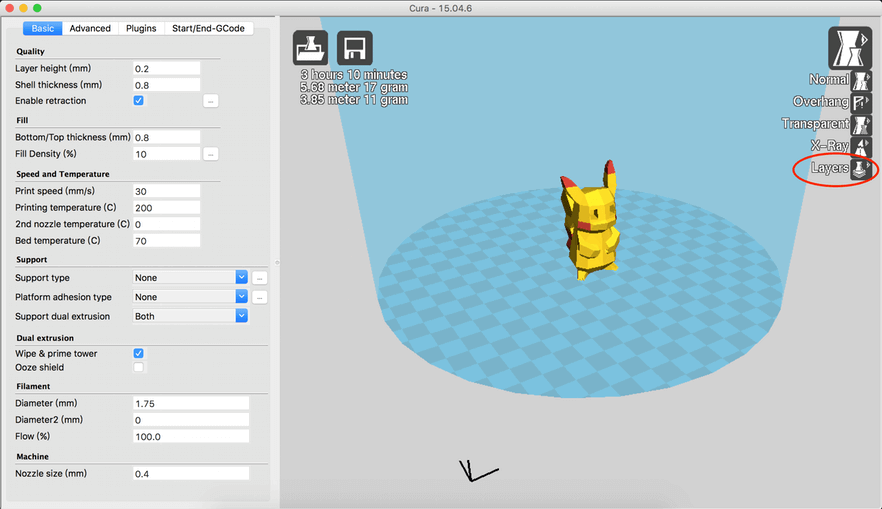 How long does 3d printing take in practice?

To find out how fast 3d printers actually print, we tested how long it takes to print two more or less complex objects on two popular desktop printers: the Ultimaker 2 and the Printrbot Plus. High-Speed Sintering promises the fastest 3d printing speed: On the industrial scale, there are even more exciting developments on the horizon.

The University of Sheffield has announced that they are building a 3d printer(funded to the tune of £1,000,000pounds)that could produce plastic parts as fast as more traditional high-volume manufacturing methods like injection moulding. The process is called high-speed sintering(HSS) and selectively fuses polymer powder layer by layer, similar to other additive manufacturing processes. But instead of using lasers, HSS will print infra-red-absorbing ink on to a powder bed. After a layer has been printed it’s exposed to infra-red light. It heats the powder covered by the ink and causes it to fuse, while the rest of the powder remains cool.

The team, led by Professor Neil Hopkinson, say the new machine will be able to make parts up to 1m3–the size of a washing machine–which is three times more capable than existing machines. The printing speed will depend on the size of the product. But, Hopkinson estimates that small components will be built at a rate of less than one second per part. But how will this benefit you? The good news is that the technology for HSS is being licensed to industrial 3d printer manufacturers on a non-exclusive basis, with new machines being expected on the market from 2017 onwards.That means we can expect a trickle-down benefit to prosumer-grade 3d printers in the not-too-distant future.

There are many challenges which the 3d printing field faces. Except for a few investors, the investment community traditionally has a no risk-taking task.

Some of the other challenges that are as below –